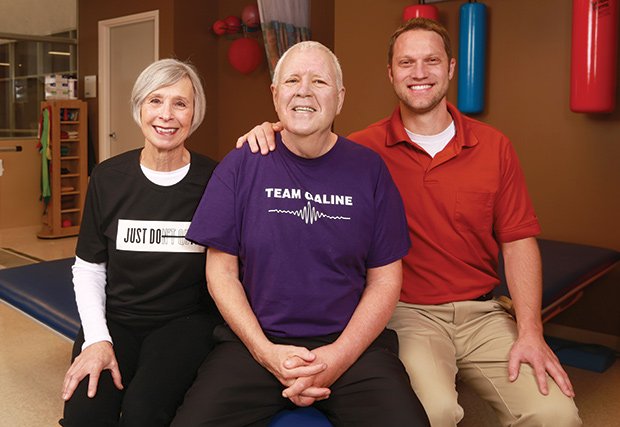 Bill Galine had suffered a major stroke that paralyzed his left side. But his therapists were determined to change that.

In April 2017, Bill Galine needed inpatient rehabilitation following a stroke. He arrived at Northern Nevada Medical Center (NNMC) to begin what he and his wife, Vicki Bovee, refer to as the jump-start in his journey back to health.

Dario Callegari, DPT, evaluated Galine and for the next 21 days, Galine went through a very intense program consisting of physical, occupational and speech therapy. Each day, Galine continued to make progress. “They got him up and walking with assistance, so it was great he was moving,” says Bovee. “Dario and his team spent a lot of time teaching Bill how to get in and out of the wheelchair, pivoting, and other movements. They were masters at training him to get in and out of bed.”

Galine and his wife say that every day, they heard the mantra of the staff – “just don’t quit.” “Bill was determined to get better, and he was focusing on doing everything his therapists told him to do,” says Bovee. “We had the best team of people taking care of him, from the nursing assistants to the therapists and beyond. The entire staff supported him, it was so amazing.”

Callegari says that Galine was the epitome of hard work of what you can do after a stroke. “Bill did an outstanding job with the therapy when he was here. He was a model patient, followed all of the directions and was very regimented,” he says. “In addition to his outpatient therapy here, he worked out in a gym with a personal trainer. Bill also currently comes in to speak to and support patients who may have difficulty staying motivated.”

Galine says having the inpatient rehabilitation at NNMC is very important for the community, especially after having a debilitating stroke. “I felt so secure here, got the best treatment in the world and they took great care of me. I didn’t feel like a number,” he says. “I had a private room, and the staff was wonderful. There was someone always here for me. What a great patient experience!”

Bovee says they knew they were in the right place their first day there. “We had just arrived and saw a young man leaving for the day. He turned around, came back in and introduced himself as Dario Callegari, the physical therapist who would be taking care of my husband,” says Bovee. “He said he wanted to meet Bill and let us know he looked forward to working with us. That was so kind of him to do that. It was our first impression of NNMC, and it was a lasting, positive one.”

Galine and his wife attend the quarterly Stroke Support Group at NNMC and wear shirts they had printed with “Just don’t quit!” They also encourage others by showing them before and after videos of Galine. “Bill can walk now. He came home in a wheelchair, then progressed to a quad cane, then a regular cane,” says Bovee. “He is at the gym five days a week, working out and getting stronger. We can travel and go out, now, too. We are just so grateful to NNMC for giving him the jump-start he needed to get his life back! He just keeps going.”