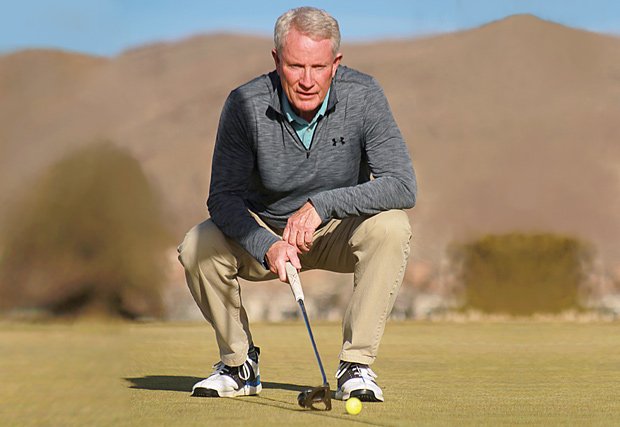 Randy Woldberg had such a great experience with his first knee replacement, he knew exactly where to have the second.

After years of favoring his left knee due to a right knee injury, Randy Woldberg started having pain and knew it was a matter of time before he would need to address it. He tried a few different treatment options, which helped buy some time. But when it became harder to go up and down stairs and walk the golf course, he started looking into surgical options. While researching online, he found a type of customized knee replacement that would be created based on CT scan images and a 3D model of his own knee. The implant would also maintain his joint alignment and be less bulky than standard models. He was intrigued, and made an appointment with Orthopedic Surgeon Christopher Dolan, MD, a local doctor trained using that particular device.

“Within a minute of meeting Dr. Dolan, I felt very comfortable with him,” says Woldberg. “We discussed how both of my knees were deteriorating, and that my right knee was actually worse based on the imaging, yet the pain was worse in my left. We agreed to move forward with replacing the left one first and have the surgery done at Northern Nevada Medical Center.”

Not just a patient, but a person

Woldberg explains that from the moment he started the pre-op process until after the surgery, he couldn’t say enough about his great patient experience. “Every person I encountered was attentive, professional and friendly. They answered all of my questions and there was no waiting around. The process was smooth, and everyone in the operating room introduced themselves. It was a very pleasant experience,” he says. “Even in recovery when I woke up, there was someone there for me who answered my questions. I never felt like I was alone or forgotten. They paid attention to my needs, and I was not just a patient to them, I was a person.”

Physical therapists came in to check on Woldberg and get him up and moving around on his new knee. “They stressed the importance of being mobile and staying mobile, and doing all the exercises prescribed,” states Woldberg. He was discharged the next day and began physical therapy three times a week. “I went back to work two weeks later; my knee felt great,” he recalls. “I also started back with golfing well before my three-month check up.”

A year later, Woldberg went back to Dr. Dolan to have the same surgery for his right knee, and had another great experience. “I recognized the same nurses and medical staff from a year before,” he says. “It’s a welcoming feeling because the same people are working there. They could easily get a job at another place, but they are there to stay, and you can tell they like working there.”

Walking 18 holes is no longer a problem for Woldberg, and neither is going up or down stairs or doing yoga. “I have complete range of motion and feel like there is nothing I can’t do. I can even get in pigeon pose with my yoga, which was impossible to do before because of the pain,” he says. “My friends know what I went through and they can’t even tell I had surgery. If I had to have any other procedure, I would find a doctor at Northern Nevada Medical Center and have the procedure there. It’s personal with them, and you can tell. They aren’t just a hospital. They make you feel like part of the community and that is very hard to achieve.”