Advanced Procedure Helps Patient Get His Life Back 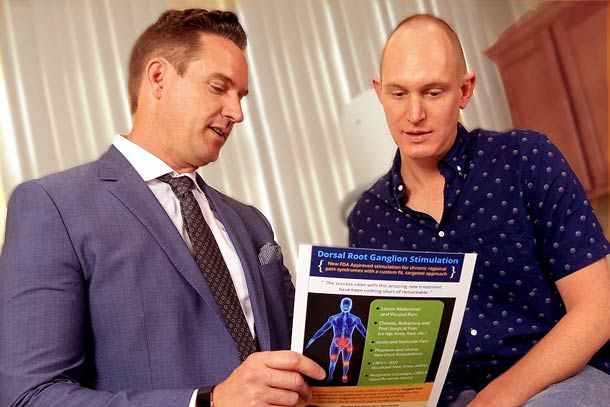 Justin Howell’s foot pain was so severe, it made it difficult to do his job as a waiter. “It was awful being on my feet all day and not being able to take a break and sit. I would get home and not want to move,” says Howell. “It even hurt to take a shower.” Due to Chronic Regional Pain Syndrome, he was in pain all day, every day. His condition also made it impossible to enjoy one of his favorite things — swimming in the ocean while on vacation.

His doctor referred him to Denis Patterson, DO, of Nevada Advanced Pain Specialists, who told Howell he was a good candidate for Dorsal Root Ganglion (DRG) stimulation therapy. It is a new system that stimulates the Dorsal Root Ganglion along the spinal column, providing more selective targeting of pain areas that are hard to reach. The physicians at Nevada Advanced Pain Specialists are the first in northern Nevada to be trained in this technology.

“I was a little skeptical at first but the doctor did a trial implant that worked phenomenally,” Howell says. So he had the permanent implant at Northern Nevada Medical Center in February 2017. Following the surgery, Howell experienced immediate relief. “I mean immediate. My pain is 90 percent less. I was told to expect a 50-60 percent improvement, so this is much better than expected,” he says.

Months after receiving a Dorsal Root Ganglion (DRG) implant, Howell’s activities are no longer limited. “I have my life back. I can go swimming in the ocean and the lake. I’m back working out at the gym,” he said. In late August, he received a replacement battery that uses even newer technology. “I had lost 80 pounds since February because I was able to start working out again. Due to the weight loss, I needed a new battery that fit better,” he says.

“I’d definitely tell others to see Dr. Patterson if they’re having nerve pain,” Howell continues. “The doctor is so kind and friendly, and so is everyone in his office. He takes into account your problem so you’re not just a number. He isn’t one to push pills when there are alternate routes for relief.”

Now that Howell is living with very little pain, he’ll be spending as much time as possible swimming in the ocean and being active once again.

Learn more about the Pain Management Center at NNMC >