When Minutes Mattered, Help and NNMC Were There 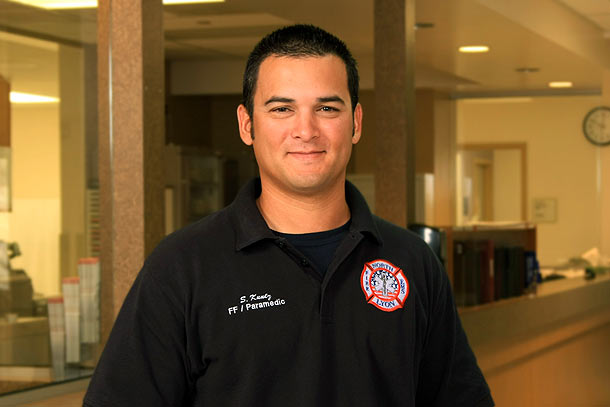 It was springtime when the patient experienced horrible chest pains. A family member acted quickly by driving their loved one to the fire department, where Steve Kuntz, firefighter and paramedic was on duty. Kuntz took one look at the patient and realized they needed to get to Northern Nevada Medical Center right away.

He convinced them to ride in an ambulance so that the patient’s vital signs could be monitored by an electrocardiogram (EKG) machine on their way to the hospital.

Three minutes into the ride, the patient’s chest pain got worse and the EKG became elevated. “I told the patient, ‘You’re having a heart attack and we’ll get you to the hospital as quickly as possible,’” Kuntz says. They arrived at the hospital just in time. In another two minutes, the patient might not have made it, Kuntz said.

According to tests taken in the Cardiac Catheterization Lab, the patient’s right coronary artery was completely blocked and that is what caused the heart attack. Doctors were able to open the blockage with angioplasty, as well as restore blood and oxygen flow to the patient’s heart. They also placed a stent to help keep the artery open.

The accredited Chest Pain Center at NNMC has a team of highly-skilled cardiology professionals available 24 hours a day, seven days a week. Kuntz says that had the patient waited to seek medical attention, they could have suffered more damage to the heart muscle. “When someone is having a heart attack, there is a critical window of time when the integrity of the heart muscle can be preserved,” Kuntz says.

Because minutes matter, it’s important that everyone know the signs of a possible heart attack. According to the American Heart Association, they include:

Learn more about the emergency services at NNMC.