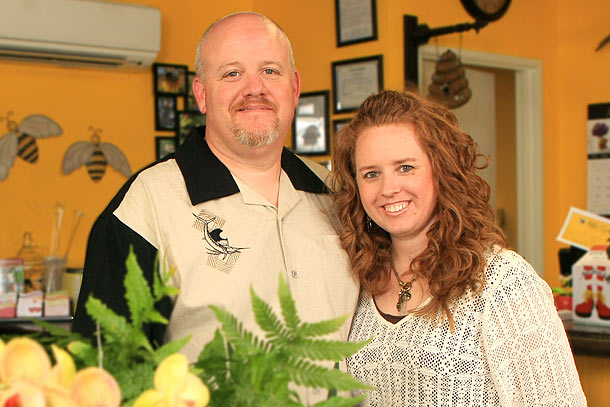 Katie Knapp, a local business proprietor for Bumblebee Blooms Flower Boutique in Reno, hopes to never need to visit an Emergency Department again. But if she does, she says she will choose Northern Nevada Medical Center.

Katie’s husband, Chris, lost his breath and almost passed out. The next day, he lost consciousness and hit his head on the fireplace in their bedroom as he fell. Although it resulted in just a small gash above his eye, they knew something was wrong and he needed immediate medical attention. Katie drove him to the Emergency Department at NNMC.

“We were not even there five minutes when someone came in to see him,” she says. “The quick-acting Emergency Department staff probably saved my husband’s life.” The hospital has not only top-of-the-line facilities and personnel, but also a policy that guarantees Emergency Department patients will get prompt attention, or a portion of their visit cost is waived.

An ultrasound of Chris’ leg revealed deep vein thrombosis (DVT), a condition in which blood clots form in one or more of the body’s deep veins. A CT scan of his lungs revealed that multiple pieces of the blood clot had traveled through his bloodstream and lodged in his lungs, causing him to faint.

Chris was hospitalized for a week and treated with blood thinners to dissolve the life-threatening clots. He recuperated at home for another week afterward.

Had he sat in the Emergency Department for a prolonged time or even gotten up to walk around, “he could have thrown another clot causing a stroke, a heart attack or even worse. It could have killed him,” Katie says.

When the Knapps arrived at the Emergency Department, the staff quickly gave them the attention they needed without causing them to panic. “They didn’t freak us out to the point we probably could have been,” she says.

Chris, 42, travels frequently for his job. He is healthy and active. He doesn’t smoke. His illness that Labor Day “was one of those things that came way out of left field and took us by surprise,” she says. Apparently, his leg had been bothering him for a while, but he thought it was just a sore muscle.

Doctors believe the clot developed because of all the flying he does for his job. Some people can form DVTs when they sit still for a long time, such as when traveling by plane or car. Now Chris wears compression socks when he flies. He gets up and walks around the cabin and takes an aspirin each day to help prevent further incidents.

A Better Experience at NNMC

The Knapps’ experience at NNMC far outshines other Emergency Department experiences, says Katie. About 10 years ago, she fell off a horse and broke her collarbone. She remembers waiting in agony for hours at another hospital’s Emergency Department. When she was finally seen, she was told they couldn’t do anything for her broken bone. “That’s another reason I appreciate the staff at NNMC and would never go anywhere else,” says Katie. “Had I come here, I would have known the same information in 15 minutes, rather than waiting for hours.”

Learn more about the emergency services at NNMC.