Stroke Patient Bounces Back Thanks to Quick Care 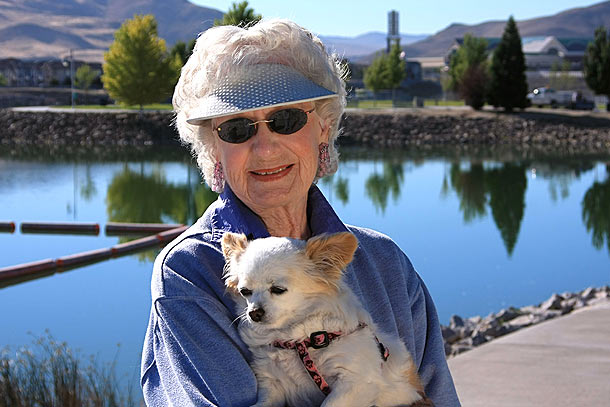 Taking her long-haired Chihuahua on a daily two-hour walk to a local marina is how Jacquelyn Smith spends her mornings.

After selling Mary Kay cosmetics for 35 years, the 88-year-old mother of two enjoys her free time and active lifestyle. Her life took a dramatic turn in March, however, when she suddenly suffered a stroke.

“I could feel that my heartbeat was different. I was light-headed and weak. I didn’t feel like I could do much, and both of my sides hurt. I just felt so weak and weird,” Smith recalls.

Because it was her first stroke, Smith did not realize what was happening. Fortunately, she did not ignore her symptoms or hesitate to seek medical attention. Smith’s neighbors responded to her call for help. Immediately, they called 9-1-1 and within five minutes, Smith was admitted to the Emergency Department at Northern Nevada Medical Center.

She would later learn that her fast reaction, and the quick response of those who came to her aid, would dramatically improve her prognosis. “I found out that was the best thing that I did,” says Smith.

She was groggy and a bit dazed when she arrived at the hospital, Smith recalls. She remembers undergoing several tests before being informed that she had experienced a stroke. The news came as a surprise.

“It was a shock because I had no idea what was wrong with me,” she says.

Smith was discharged that night. Although she did not experience paralysis or other long-term side effects from the stroke, her life has undoubtedly changed.

In addition to having to take medication to control her high cholesterol, Smith has also opted for a healthier diet.

“I watch what I eat now. Before, I was eating a lot of rich food. I didn’t realize it was causing that kind of a problem,” she says. “I try to eat more fruits and vegetables. I stay away from cookies and cakes.”

Smith says the attention she was given at NNMC was unparalleled. “I couldn’t have expected anything like the care I received. Everyone was concerned with whether or not I was comfortable,” she says. “They took such good care of me, I felt like I was their grandmother!”