Rehab With a View

Stroke Patient Gets Rehab With a View 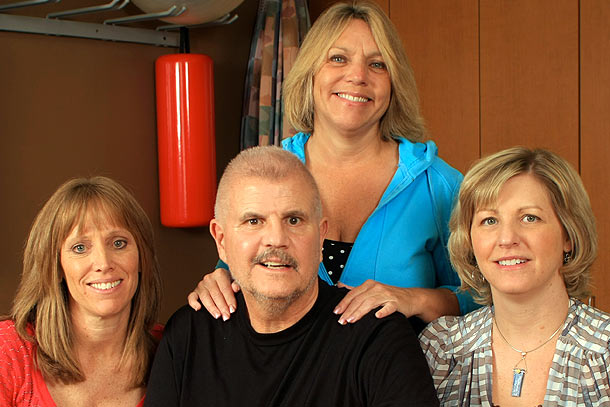 “Rick is doing so well because everyone has gone above and beyond,” says Brenda, 55, of Tonopah. Her 58-year-old husband has mild hypertension and a family history of stroke. But when he experienced a stroke in early May, it still came as a total surprise.

Rick was getting ready for his job as a UPS driver when Brenda noticed the telltale signs: slurred speech and glassy eyes. Only later did she learn that he had also lost his balance walking into the dining room.

Having worked in healthcare as an administrative assistant, Brenda knew that time was of the essence. She immediately called 9-1-1, and Rick was transported by ambulance to the closest Emergency Department. From there, he was moved to the Intensive Care Unit of a hospital in Reno where he stayed until he was out of danger. After his discharge, he was referred to a rehabilitation facility for follow-up therapy. Unhappy with the care at this facility, Brenda and one of their two daughters, Kellina Ferris, who is a registered nurse, went online to find a better alternative.

That’s when they found the eight-bed Inpatient Rehabilitation Center at NNMC. It offered exactly what they needed: rehabilitation that included physical, occupational and speech therapy in an inpatient hospital setting.

It was 2 AM when they left a message for director Lita McCaw, OTR/L, a licensed and registered occupational therapist with 23 years of experience. The very next morning, McCaw returned their call and invited them to come in and see the facility which features all-private patient rooms, a gym, a dining room and scenic views overlooking the city. “As you look outside, you see the foothills of the Sierra Nevadas. I said, ‘Oh my gosh! Rick has to come here to get better,’” Wilson recalls.

The Wilson family lives 240 miles from Sparks, so transferring Rick to NNMC meant Brenda would have to stay in a nearby hotel. She says she knew it would be worth it, and it was.“We’re just so very thankful for all that NNMC has done to help Rick get well,” she says. After four weeks of rehabilitative care, Rick is on his way to a full recovery.

Learn more about the Inpatient RehabCenter at NNMC.